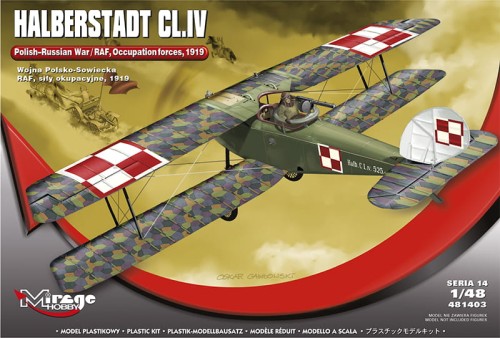 Availability: product available online and in-store
Dispatched within: 24 godziny
Delivery: The price does not include any possible payment costs check the delivery methods
Price: €34.65 34.65

The Halberstadt CL.IV two-seater was designed by Ing. Karl Theis (chief designer at Halberstädter Flugzeugwerke GmbH). The design was planned to replace the earlier very successful Halberstadt CL.II close support aeroplane. Halberstadt CL.IVs reached the front line in early summer of 1918. By the end of the war about 18 attack squadrons (Schlachtstaffel) completely or partly re-equipped with the type. After World War I, planes of this type were used in the aviation of Lithuania and Estonia. At least one was tested by RAF. There were four Halberstadt CL.IV in Poland and one captured by Russians...

Halberstadt CL.IV No. 525/18 belonging to the 14th Reconnaissance Squadron.

Halberstadt CL. IV (Rol) No. 8078/18. Taken and tested by RAF after the war at Bickendorf airport (Butzweilerhof).

Shipping costs The price does not include any possible payment costs

up
Shop is in view mode
View full version of the site
Sklep internetowy Shoper.pl